In the BW sector was the Lesser Whitethroat at the Harholt Plantation. Among the usuals was a Buzzard, four Green Woodpeckers, two Goldcrests, three Coal Tits, four Long-tailed Tits, 10 Chiffchaffs, six Blackcaps, a Whitethroat, two Nuthatches and a Song Thrush.

A Southern Hawker and four Azure Damselflies were at Piddly Pond. A Vapourer moth was seen, along with Tree Bumblebee and a few Purple Helleborines.

A Red Kite flew over Steep Banks this afternoon and swirling around the farm were 12 Swallows and 30 Swifts. Five Yellowhammers were counted. A Lesser Black-backed Gull flew over and a Bullfinch was around Lunch Wood. Selected other sightings from CF include a Sparrowhawk, 104 Herring Gulls overhead, a Kestrel, six Skylarks, two Chiffchaffs, seven Whitethroats and six Blackcaps.

A Lesser Whitethroat was still singing in the BW sector, where a Whitethroat, four Chiffchaffs, two Blackcaps and three Bullfinches were noted, along with a juvenile Song Thrush.

The weather wasn't ideal for butterflies but those recorded included an Essex Skipper, a Large Skipper and six Marbled Whites in BW and a further three Marbled Whites at CF.

It is worth noting that it has come to light that the White-letter Hairstreaks were first seen last year. The area to search for them is immediately west of the orchard by Park Farm.

Four Swallows were over the farm and a Little Owl was on the east side of Horse Pasture; a Buzzard and a Yellowhammer were also noted at the farm.

It's easy to fall into a state of birding lassitude at this time of year but unexpected encounters cannot be discounted, as demonstrated by a Redshank heard over Chipstead Downs at 11:20 (GB), representing the second patch record. Other news included the Lesser Whitethroat still singing by Hither Field and a Hobby hunting at the farm, where two Little Owls were calling, a Swallow mobbed a Sparrowhawk and 12 Swifts flew over.

A female Purple Emperor made for a thrilling encounter on the path near Piddly Pond while a Small Blue was showing on the Kidney Vetch in Barn Field. Other butterflies on the wing included Large Skipper, Small Skipper, Small Heath, Comma, Small Tortoiseshell, Red Admiral, Large White, Ringlet and Meadow Brown. Piddly Pond sported a Southern Hawker.

The Systematic List has been tidied up and updated.

A Lesser Black-backed Gull flew past and a Little Owl called from the Infront George East copse while 12 Swifts and six Swallows flew around.

Text-list: The grapevine system is out of order again - any urgent news will be posted via Twitter. 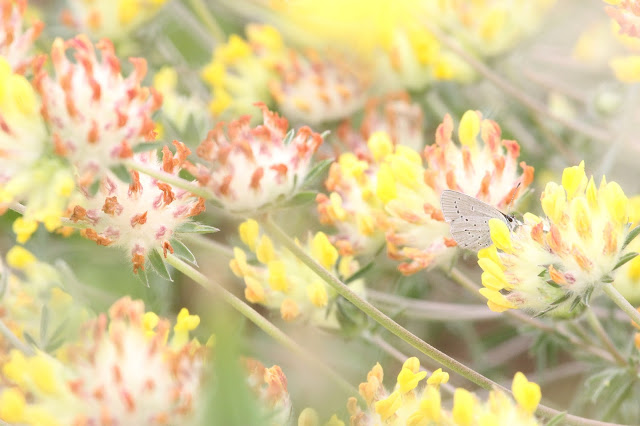 A juvenile Pied Wagtail was at Legal & General. Two Yellowhammers were at the farm. Sightings in the BW sector included a Lesser Whitethroat on the edge of Hither Field and a gathering of 23 Stock Doves there. Three Whitethroats were also noted. 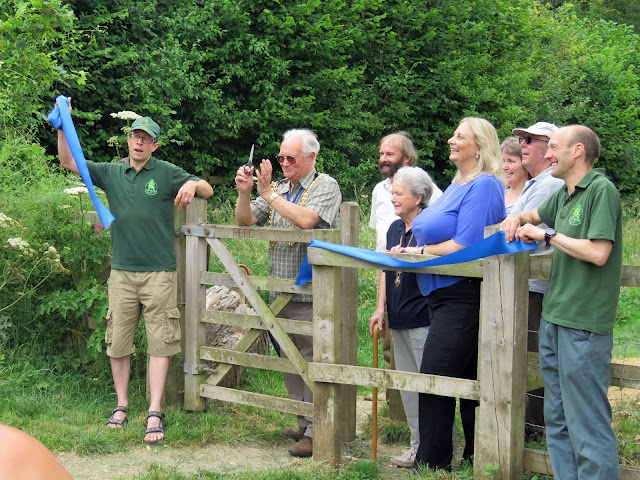 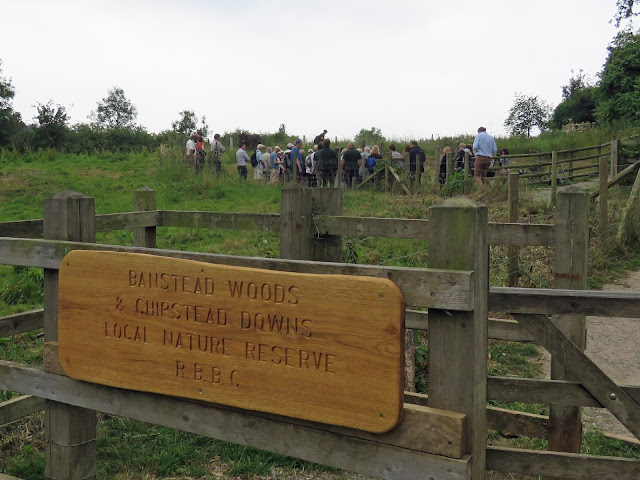 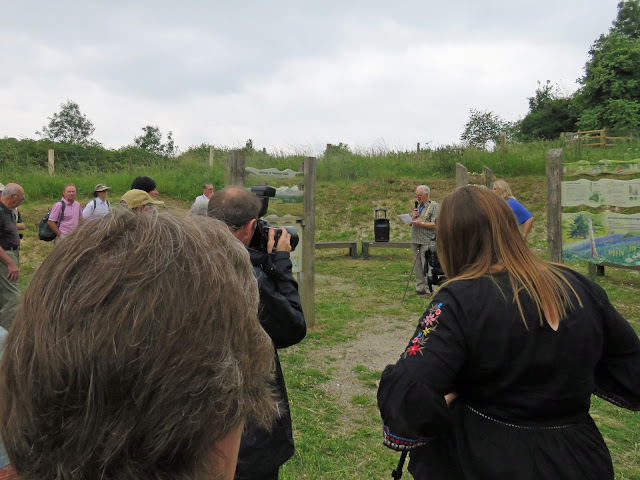 Here is a local news piece about the opening:
http://www.getsurrey.co.uk/news/surrey-news/nature-trail-inspired-chronicles-narnia-13220046

Two Swallows and five Swifts were over the farm in the evening, while two Yellowhammers were around Canons Farmyard.

Several Small Tortoiseshells and Meadow Browns were on the wing.

A Hobby flew over BW but as far as birds go it was generally another quiet summer day on the patch produced the usuals, such as Yellowhammer, Kestrel, Whitethroat, Goldcrests, Nuthatches, Green Woodpecker and Song Thrushes.

There have been few avian highlights since the last update, but a Red Kite did call in and check out Owl Meadow on 17th. Singing Lesser Whitethroat and Garden Warbler around Legal & General on 13th were unexpected, but regular Garden Warblers were still singing by the caravan site on 13th and at Harholt (two) to 15th. One of the established Lesser Whitethroats was rattling at Harholt on 16th. Three Lesser Black-backed Gulls over the farm on 16th and three Pied Wagtails, including a juvenile, at Legal & General on 18th are the pick of the other bird sightings. Family groups of Whitethroats are now appearing, the first being at Stagbury Field on 15th, while a juvenile Blackcap was caught (along with a male Whitethroat) at Harholt on 15th. Fledgling Jackdaws were noted around The Knoll on 15th.

The patch has been alive with butterflies, as we enter the peak few weeks for our specialist species. The biggest news was a sighting of two Small Blues in the Banstead Woods sector on 15th, a testament to the conservation work of the Woodchips group. Other news from the sector includes the first Dark Green Fritillary on 18th, with the first Marbled White being seen on 13th and counts of this stunning species rising to 50 on 18th. The first four Essex Skippers of the year were logged on 18th, three days after the first Small Skippers. Singles of both Dingy and Essex Skippers were noted on 18th and two Green Hairstreaks were seen on 15th. Four Large Skippers were counted on 15th. A lone Small Copper is down for 18th. Counts of commoner species in the BW sector include nine Ringlets on 18th (after the first five on 15th), 63 Meadow Browns on 15th, and two Commas on 18th; five Red Admirals on 18th, and eight Small Heaths and nine Speckled Woods on 15th.

Butterfly news in the CF sector includes the earliest date this year for Ringlet on the patch, pipping BW by a day with two on 14th, this species rising to 30 on 17th (when 40 Meadow Browns were counted). 14 Small Tortoiseshells was a stong total on 17th, when three Speckled Woods and three Commas were seen.

After a sighting of our first Southern Hawker of the summer on 13th, another busy session for odonata on 18th saw four Broad-bodied Chasers, 15 Azure Damselflies and five Large Red Damselflies, all being seen around Piddly Pond but for one of the chasers, which was at Park Farm.

Seven Swifts were over BW and the Lesser Whitethroat at the Harholt Plantation was still singing.

Eds: We have updated the submission form to include dedicated fields for odonata.

A quiet day for birds, the only significant news being the continued presence of a Lesser Whitethroat in The Knoll, a Greenfinch singing along Outwood Lane and a lone Swift over the farm.

We did enjoy a patch first, though, with a stunning male Beautiful Demoiselle seen along the edge of Banstead Woods at Perrotts-by-Wood (IGM). Piddly Pond provided further odonata interest, with no fewer than three Broad-bodied Chasers seen alongside five Azure Damselflies, three Large Red Damselflies and a Common Blue Damselfly.

Avian highlights at the farm included three Mallards, 25 Swifts, a Swallow and two Pied Wagtails. A further 18 Swifts were seen over BW and a Lesser Whitethroat was still singing at the Harholt Plantation.

A Painted Lady made an appearance at Stoney Nob, while two Small Tortoiseshells and five Meadow Browns were seen across the patch.

Another quiet summer day on the patch, with a few resident birds seen in the BW sector, along with a Brown Argus of note.

Eight Swifts were seen over the BW sector and residents going about their business included a singing Yellowhammer at Lunch Wood.

A Hobby flew over Perrotts Farm and two Lesser Whitethroats were singing in the Harholt Plantation this morning while a few Swifts moved overhead.

A remarkable morning for raptors saw six Red Kites share the sky at the same time over CF. Also rather unexpected was a pair of Peregrines engaged in a food pass. A walk along Chipstead Downs revealed a Rook, a Greenfinch and seven Swifts, while a local male Kestrel was showing well.

It was probably a little drafty for most butterflies' liking but singles of Comma and Common Blue were noted, along with three Meadow Browns.

A Red Kite flew low over the A217 in the evening and two Mallards graced Piddly Pond. The Harholt Plantation again resounded with the rattling of a Lesser Whitethroat and two Swifts flew over the BW sector. The first fledgling Great Tits of the year were noted.

Sightings in the BW sector on 1st included a Hobby and the Lesser Whitethroat still singing at The Knoll, as well as two Mistle Thrushes. Nothing unusual, apart perhaps from two Mallards, was noted at CF on 2nd but breeding Yellowhammers and Whitethroats were in evidence.

It's worth mentioning that we have been quietly logging first juveniles and should really have been reporting them here. So far, we've recorded young Robins, Blackbirds, Dunnocks, Long-tailed Tits, Blue Tits, Goldfinches and Nuthatches, while young Great Spotted Woodpeckers have been heard in the nest.

There was late news of a flock of 22 Canada Geese over the east side of BW on Monday.

Observers are credited in alphabetical order by surname in the daily postings.