Canons Farm & Banstead Woods together form a large area of mixed and dynamic habitat neatly sandwiched between the settlements of Banstead, Burgh Heath, Chipstead and Kingswood. It is bordered on all sides by road and railway. 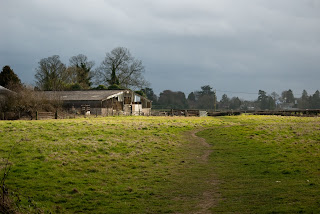 From the A217, park at the western end of Canons Lane (near Burgh Heath) at approximately TQ 245 579. It is preferable to park along Ballards Green, which is a cul-de-sac off Canons Lane. If visiting the woods, or accessing the farm from the east end, via the woods, there is a purpose built car park at Banstead Woods at approximately TQ 273 583. There are many public footpaths throughout the area, although it is probably a bit tricky for wheelchair users. In terms of public transport, the Kingswood railway  station (Tattenham Corner Line; Southern operated) is a ten to fifteen minute walk from the farm. The 420 bus (Metrobus) which operates between Redhill and Sutton stops at Lyme Regis Road - less than a five minute walk from the NW end of the recording area. 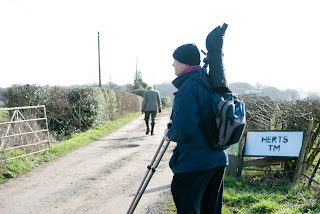 Since 2005 a growing band of observers have been watching the farm and wood, revealing an area that can reward perseverance. During the winter months the fields can produce good numbers of Skylarks, thrushes and Yellowhammers, and in some years finch flocks - primarily Chaffinches and Linnets - can build to impressive numbers, with Brambling a hoped for component species. Little Owls are always present and will often reveal themselves by calling during the daylight hours. Spring and autumn passage are exciting times of year, with chats, warblers and hirundines passing through along with wagtails, pipits, waders and raptors. It really is the best time for the unusual to appear, no record more representative than the trip of Dotterel that spent the best part of the day on site on May 4th 2012. Breeding species include Common Buzzard, Hobby, Little Owl, Skylark and Yellowhammer. 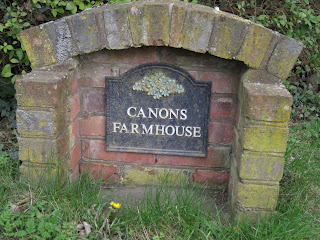 The woods are nationally important for a number of insect and plant species, and the CFBW group members are helping to monitor the populations of the most notable of them. Our 'Wildlife' page includes many images, and includes several lists of what can be seen. Recent mid-summer butterfly walks have recorded 25+ species, including Purple Emperor, Silver-washed Fritillary, Dark Green Fritillary, Chalkhill Blue and Brown Hairstreak.

We'd love to hear your queries, comments and contributions so please email cfbwbirds@gmail.com

Observers are credited in alphabetical order by surname in the daily postings.